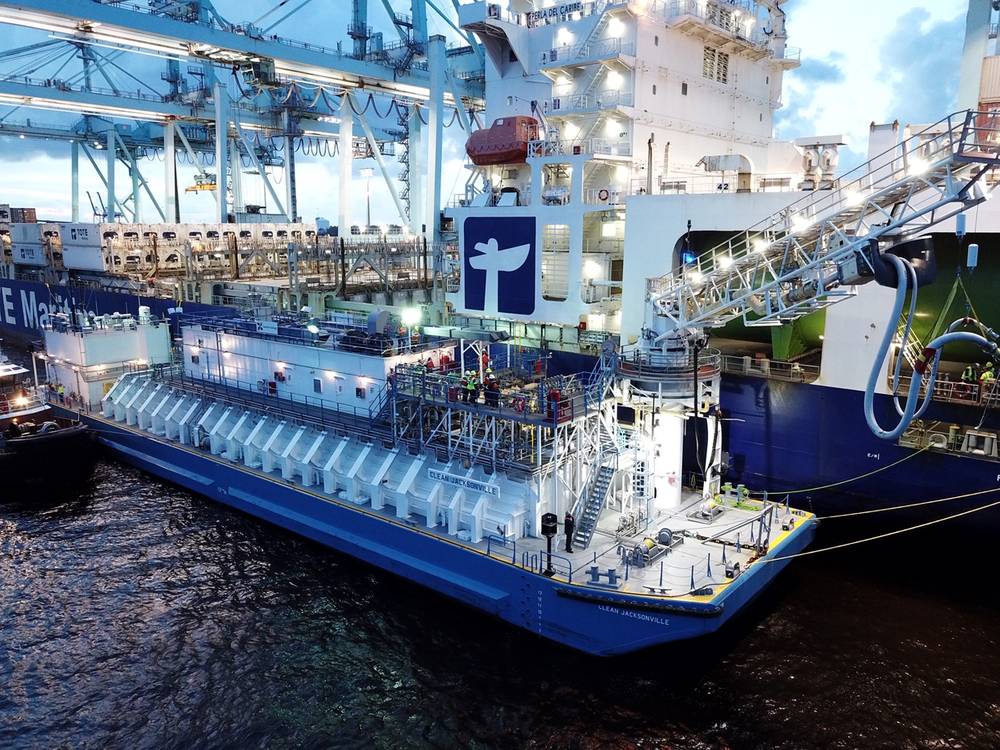 JAX LNG completed construction of Phase I in late 2018 and has been in operation ever since. An expansion of JAX LNG (Phase II) is currently underway. Once completed, Phase ll will double the LNG storage capacity and triple liquefaction at the facility located at Dames Point near Jacksonville.

JAX LNG recently completed the fi rst fueling of a marine vessel in the United States with a blend of LNG and renewable LNG (RLNG). The blend was loaded into the Clean Jacksonville bunker barge to fuel the Isla Bella, the world’s fi rst LNG-powered containership put into service by TOTE Maritime Puerto Rico in 2015. Element Markets supplied the renewable natural gas (RNG) used to produce the RLNG via renewable thermal certifi cates (RTCs). Using RLNG to fuel marine vessels is a readily available pathway to net-zero emissions by 2050. RLNG’s emissions profi le as a maritime fuel is superior even to that of LNG, which already reduces greenhouse gas emissions by more than 25% over ultra-low sulfur diesel.

Decarbonization of the transport sector has greatly accelerated through the use of regulatory incentives such as the alternative fuel tax credit, which encourages companies to adjust operations and make investments in assets that reduce carbon intensity

Produced from the decomposition of organic waste, RNG is compatible with existing natural gas infrastructure, providing a practical and replicable source of energy that mitigates and repurposes carbon emissions. For this bunkering event, RTCs were matched to the physical LNG loaded into the Clean Jacksonville to create the RLNG/ LNG blended product.